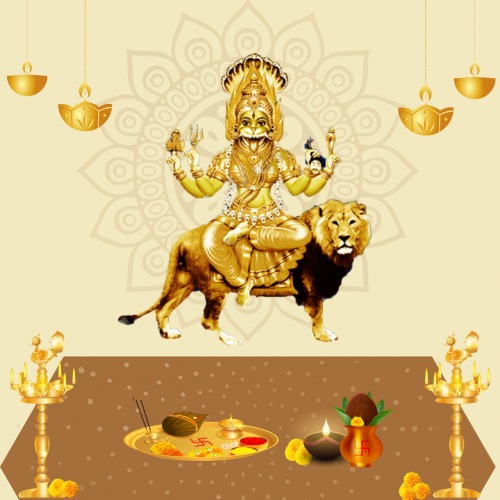 Goddess Pratyangira has the integrated strength of Lord Shiva, Lord Vishnu, and Devi Shakti and has a ferocious look, having the head of a lion and the body of a human. It preserves and detaches from black magic, witchcraft, evil spirits, and bad vitalities. It relieves its admirers from debts, illnesses, adversaries, and evil karma. Venerating this yantra detaches all problems and brings affluence. It also provides relief from the disastrous effects of the planet Ketu.

A Puja tokri consisting of Prasad, vitalized rudraksha, silver tabeez, and Durga yantra will be sent. She originated from Shiva's third eye. Goddess Pratyangira Devi, after the destruction of Hiranyakashyap, was the one who calmed Lord Narshimha, who is the personification of Lord Vishnu. When to perform Pratyangira Devi Homam? This puja, along with Mantra Japa and Homa, is to be performed on the nights of Amavasya and Poornima and accommodates preservation and affluence.