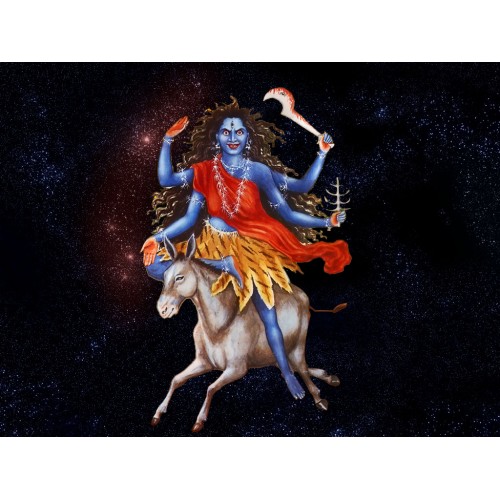 In Hindu mythology it is believes that she is only Devi Kaalratri who could demolish the extreme agony of devil Raktabeej.

No one could kill Raktabeej because one drop of his scattered blood was able to form another embodiment of Raktabeej, and that way scattered blood of Raktabeej forms other billions of Raktabeej. Then Goddess Bhagwati manifested herself in Kaalratri and kept a Patra (vessel) to keep and imbibe entire blood of his body. Kaalratri Maa is specially worshiped to destroy influence from the life of devotes. On the 7th day of Saptami fast, Navratri Pooja is observed to please this deity. Tantra-mantra practices are performed and accomplished under blessings of this Goddess Kaalratri.

Priests will perform Puja as per vedic rituals based on birth details and please mention your birth details such as name, date, place, time, & Sankalp (your wish) at checkout.This is a individual Puja (you may do puja on individual name or include your near and dear ones in the puja). You will be provided with the contact no. of the priest, to call during the Puja/Sankalpa.