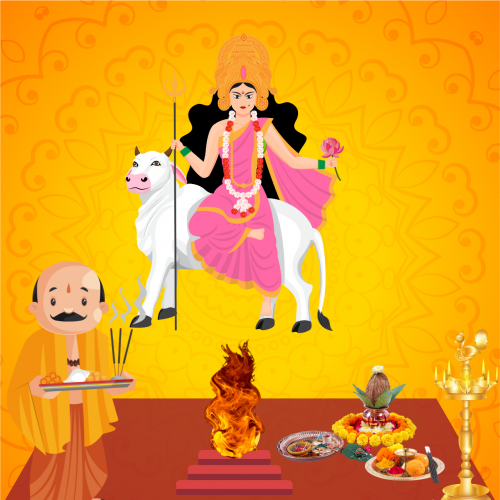 Shailputri Maha Puja is should be done specially at the first day of Navratri or otherwise at any subha muhrta. The first form of Maa Durga among the nine is Shailputri. Shailputri ma is known, because she has incarnated from Himalaya the Emperor of mountains. Shailputri ma in her previous birth was born as a daughter to Daksha Prajapati. She was named ‘Sati’. Sati in her next birth she was born as a daughter of Daksha Prajapati. and was named as Parvati.

According to Hindu mythologies and Shiv Mahapuran, Devi Sati, daughter of Daksh Prajapati, was got married with Mahadev. But King Daksha was not completely in favor of this marriage. One day, King Daksha organized a Maha Yagya. All near dear ones and deities were invited except Shiv and Sati. Finding this Sati got hurt and realized that her father was only insulting her husband Shiva. In this situation, sati scarified her body burnt in a fire of yogic Yagna. This View was extremely painful for Mahadev. Mahadev made himself isolated from all and went for a penance of long eras. Without Mahadev the whole universe was in disorder. Re-birth of Sati named as Parvati at home of King Daksha Prajapati nurtured rays of hope.

However it was difficult for Parvati to get her Lord Shiva, as Mahadev lost himself in densest of Sadhna.

Priests will perform Puja as per vedic rituals based on birth details and please mention your birth details such as name, date, place, time, & Sankalp (your wish) at checkout.This is a individual Puja(you may do puja on individual name or include your near and dear ones in the puja). You will be provided with the contact no. of the priest, to call during the Sankalpa/Puja.